Where is Knik Arm? Commuting time?
Bridge cost?
Community decision
Who benefits/loses?
Who will pay?
How many $$ spent?
Perceived needs
Other ways
Alternative options
What will the toll be?
Isn't the bridge "dead"?

Frequently Asked Questions
Click on the links at left to jump to sections of this page. 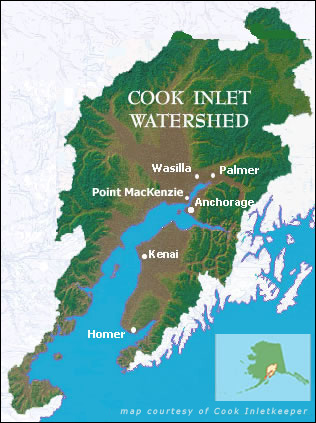 Where is Knik Arm?

Knik Arm is a branch of Cook Inlet, a 192 mile long estuary that stretches from the Gulf of Alaska between the Kenai Peninsula and mainland southcentral and southwestern Alaska. Knik Arm begins at the Inlet's northern edge, starting near Anchorage and heading north and east (see Map modified from the Cook Inlet Keeper website).

The proposed Knik Arm bridge would stretch approximately 2 miles from Point MacKenzie on the west (in the Mat-Su Borough) to Anchorage on the east.The crossing would be less then five miles north of Anchorage.

Will the bridge reduce commute times or relieve congestion?

The vast majority of people traveling to Anchorage to work from the Mat-Su Borough will continue to drive the Glenn Highway because it will continue to be the faster, toll-free route into Anchorage. Only residents living in rural areas like Big Lake, Houston, and Point MacKenzie will find the bridge route more efficient (see the time and distance analysis done by Wilbur Smith Associates) Additionally, the bridge will add to Anchorage's downtown congestion.

How much will the bridge cost?

Estimated Costs for the Knik Arm Bridge and Its Access Roads

Phase 1 represents a 2-lane bridge with a connection to A and C Streets downtown Anchorage and Phase 2 represents expansion to a 4-lane bridge with a connection to Ingra-Gambell Streets (i.e., the Seward Highway) outside of downtown. The National Constructors Group [Dead link-this study is no longer online.] independent engineering study argues that state or local financial participation is critical for the project to move forward. The Federal Highway Administration study assumed an 8,200' bridge with filled-in causeways on both sides. Several key federal resource protection agencies, however, prefer a 14,000' bridge to retain Knik Arm's tidal flows. Such a bridge would cost significantly more, and may be required by these agencies in order to protect the endangered Cook Inlet beluga whale.

How do communities know they need a bridge?

Historically, bridges were constructed when ferry service was unable to handle the number of people needing to cross a waterway.

Who will benefit from the bridge? Who will lose out?

Those who may benefit from the bridge include:

Those who may lose out from the bridge include:

In the summer of 2005, the U.S. Congress granted a $231 million earmark for the bridge. After overwhelming national criticism over spending massive amounts of federal tax dollars on "bridges to nowhere," Congress removed its mandate to spend the $231 million on the Knik Arm bridge project. The State of Alaska allocated $93.6 million for the bridge in federal money and small amounts of state money.

The Knik Arm Bridge and Toll Authority (KABATA) currently is negotiating with private investors as part of a public-private partnership. Given the worldwide credit downturn, however, it is unlikely this project is fundable via that means since toll revenues will not be sufficient for this project to be worth the investment. KABATA does not have a financial plan that addresses current problems with private funding.

How much has been spent on the bridge to date?

KABATA has spent over $91 million to date in planning to construct the bridge. In the state's fiscal year ending June 2009, KABATA spent over $13,400 per day. As a comparison, Anchorage spends approximately $22 million each year to meet all its road, public transportation, sidewalk, and trail needs.

What are the perceived needs for the bridge?

The Knik Arm bridge was proposed to meet a variety of needs both for Anchorage and the nearby Mat-Su Borough. These perceived needs include:

Can the needs be met in other ways?

What are the alternatives to the proposed bridge?

During the public comment period for the National Environmental Policy Act (NEPA) "scoping" period, the public proposed two primary alternatives to the bridge:

Although it is supposed to analyze all reasonable alternatives in the NEPA Environmental Impact Statement, in its Scoping Summary Report issued in November 2005, the Federal Highway Administration (FHWA) rejected all the road route alternatives through Elmendorf as "not reasonable" because they are slightly more inconvenient for most travelers to Anchorage and cost more than the more-direct road route through Government Hill. This decision ignored the primary benefit of the road route alternatives through Elmendorf - preserving the neighborhood integrity of Government Hill.

Similarly, the FHWA also considered the four-part, non-bridge alternative "not reasonable" even though it was designed to meet the same need criteria as the bridge, and would do so at a small fraction of the cost of the bridge and its access roads.

What will the bridge's toll be?

Wilbur Smith Associates, an infrastructure consulting firm and a consultant to KABATA, estimated that the toll would be $5 each way for passenger vehicles (2007).

The Anchorage Assembly voted in 2008 to begin a process to remove the bridge from the community's Long Range Transportation Plan. Anchorage's transportation decision-maker, AMATS (which stands for Anchorage Metropolitan Area Transportation Solutions), has looked into doing so and, as of early 2010, is considering moving bridge construction to 2018 or later. Such a move does not stop spending on the bridge, but could decrease the amount spent annually.